Tracks 225 to 266 deal with the fog lamp switch (E23) as well as washers and wipers. No misteak there; there are 3 pages of current flow diagrams but few devices. 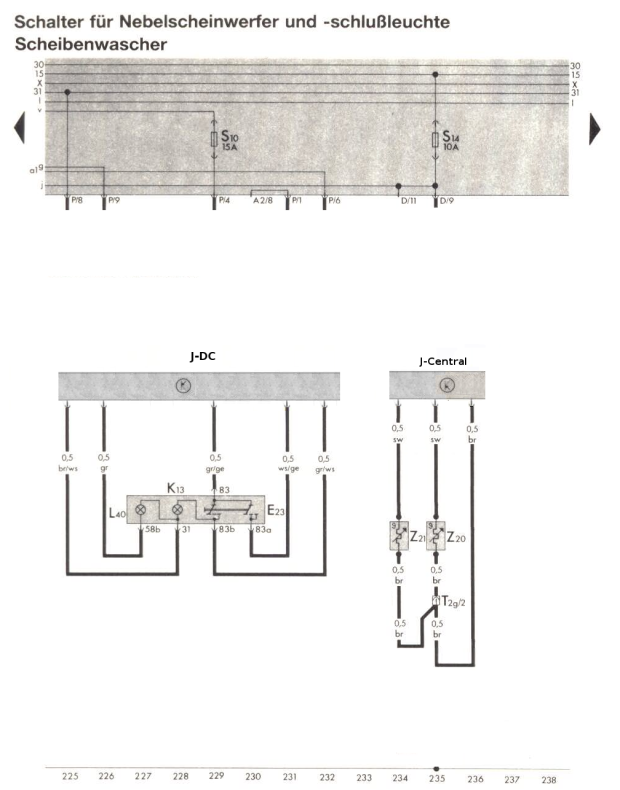 Front and rear fog lights are controlled by the dash-mounted switch E23, monitored and driven by J-DC. The switch is illuminated by lamp L40 for the driver’s convenience and contains a tell-tale K13 to indicate (nominally) when the rear fog lamp is in use.

The driver should generally be able to tell if the front fog lamps are on without such an indication, unless they have them on in daylight in conjunction with the low-beam headlights. A novel use of the switch through J-DC makes it possible for K13 to indicate dimly or even to “throb” when only the front fogs lamps are switched on.

A rapid blinking of K13 can be used to indicate a fault in the physical lamp, even when none of the fog lamps is being used. The driver then pressing the switch and watching for the blinking to stop would identify which set of fog lamps has the fault, front or rear. Once “diagnosed” that way, the blinking would stop until the car started again after the ignition key has been removed as indicated by the S-contact of the ignition switch D.

A similar fault indication can be used for the main and park lamps, using the switch illumination lamp as a tell-tale.

A different, higher warning speed should be settable, corresponding to the front fog lamps.

Z20 and Z21 are the left and right windshield washer jet heaters, fitted to some other Golfs. Their connection to the network is included here for completeness. Each would be driven individually with a common return back to J-Central, which would be the node closest geographically to the washer jets.

My Golf can cope with cold showers. 😉

Wipe On. Wipe Off

J-Central also operates the front wiper motor (V). It requires only 4 of the 5 wires normally used for operating the wiper motor. That could be reduced down to 3, but that would prevent direct use of the motor’s normal speed winding and require PWM of the high-speed winding at all times when the wiper is required. Which is, comparatively, hard work to implement, especially when electrical noise has to be suppressed. 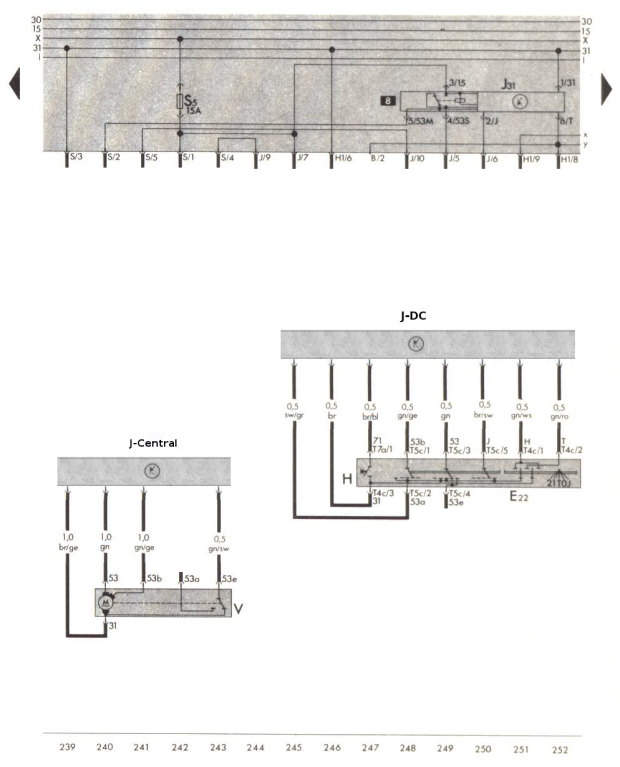 As discussed on the Front Body Nodes page, the only knowable wiper motor position is that of “parked” at which point terminal 53e is connected to terminal 31. A connection at 53a to the motor nominally powers the motor into parked by supplying current from a supply at 53e. But that is not necessary any more as J-Central drives the motor until it detects the closing of the contact 53e to 31. Or until implausible operation is detected.

Besides over-current and short-circuit in the motor itself, the switch contacts may become “stuck”. J-Central could “notice” that even during normal operations as the motor goes through the parked position if wiping continues. That quasi-regular ticking would be used to anticipate the contact closing and reducing the motor supply current to gently park the wipers after the driver switches them off.

But if there is no ticking at all for a “long time” and the wipers must be stopped, then J-Central has no option but to bring the motor to a stop. Wipers “parking” in a random position should be recognized by the driver as a fault in the wiper’s parking. That is far less tragic than the comedy that ensues in the same circumstances with factory wiring; where the wipers continue whenever power is available at the X terminal in the central electrics; and the driver hasn’t pulled the fuse. A rare fault, but not implausible.

J-DC watches what’s happening at the wash-wipe stalk on the steering column; and the horn contact (H) that’s wired together with it. The switch contacts for washing and wiping (E22) are rather tricky to interpret at a glance. Some details were already discussed on the Steering Column page.

Briefly; J-DC decodes the stalk position, figuring if it’s off, normal wipe, fast wipe or intermittent as well as watching the momentary contacts to wash either the front or rear window; and to start/stop the intermittent rear wipe.

Quite a bit of the trickiness in the switch revolves around the operation of the washer pump which is reversible. The H and T terminals of E22 provide positive/negative of negative/positive voltage to operate the pump in the desired direction.

Washer pump V59 is bi-directional. In one direction, it delivers fluid to the front washer jets and in the other, to the washer jet at the rear window. 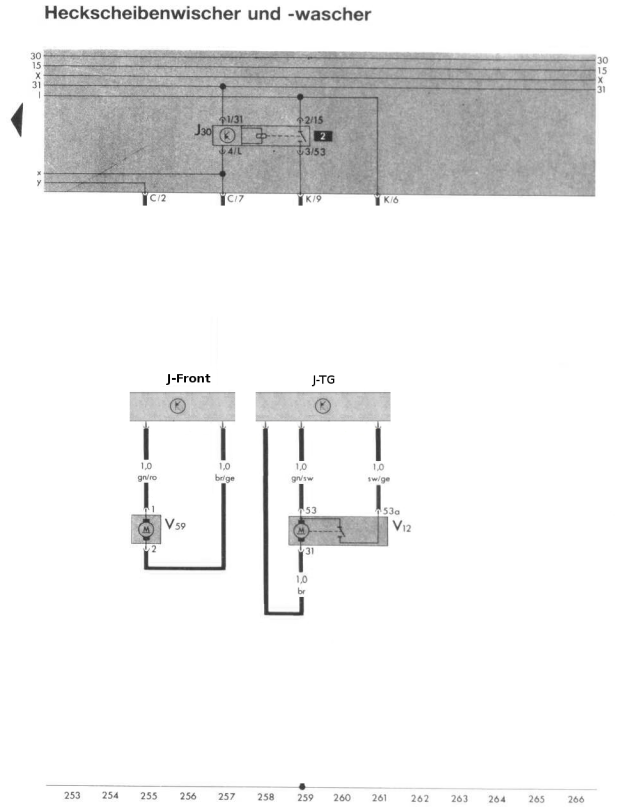 The washer fluid reservoir is at the front of the car, just behind the battery and close to where J-Front is to be installed so J-Front will drive the washer motor in either direction using an internal H-bridge circuit. Ex-factory, the washer pump operates only as long as the driver holds the stalk in a wash position. This can get tedious if the system has been “dried”. Although the pump incorporates a check valves to prevent draining back to the reservoir, they’re not perfect and cannot anyway prevent other losses.

The real time (as in on the wall clock) that the car has been switched off can be known and that time used to determine if the first wash cycle would be automatically extended to several seconds.

The rear wiper motor V12 will be driven by J-TG in the tailgate in a manner similar to the operation of the front wipers. It is only a single speed motor, the connections are fewer and the park position opens its connection between terminals 53 and 53a.

Unlike the factory-fitted J30 relay for the wiper, J-TG can perform more “tricks” with the wiper motor, providing e.g. variable time for washer fluid to arrive before wiping, automatic, multiple wipes after the end of washing and a wipe to clear the last wash water dribbles off, some seconds after the wipes to clear the wash water finish.

By using the status of the network, J-TG can also do some things automatically like wiping the rear window when the transmission is put into reverse and the main wipers are operating.

J-TG can “unload” the electrical load in the tailgate by suspending the heating of the demister element while it wipes the glass.

And so the tale of woe and wonder reaches the end of another chapter. This is the last of the “standard electrics” posts.  Others will deal with the optional goodies like electric mirrors, airconditioning, central locking, …

I know that you can hardly wait!

Unless otherwise noted, information published on this blog is Copyright © 2011, 2013 Bernd Felsche, Perth, Western Australia and remains the intellectual property of the author.
Any novel inventions described herein may not be patented as this blog describes established, prior art.